To listen to many within the movement that has become the Tea Party in this country you would think that they have an inside track into the thinking of all those responsible for founding this country, especially those 55 men who sat in Liberty Hall in Philadelphia for 4 months in 1787 and composed the document that is the basis for the laws of our land today – the Constitution. 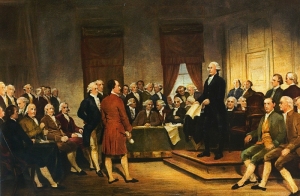 In general the Tea Party is basically right when they say that many 18th century Americans were concerned with a strong distant, centralized power and decided their rights would be better represented closer to home in state government, but their fear centered around the British Royalty they had recently won their freedom from, not an elected government.  After forming a confederation of independent states it became clear to astute men of politics then that the loosely aligned “countries” were actually weaker than if they were more united under the auspices of a central power.

Much of what we hear from Tea Partiers today about James Madison, Benjamin Franklin and George Washington reflect a pre-revolutionary attitude about states rights.  Once they had gained their independence from Great Britain however it became apparent that commerce, infrastructure and dealing with a foreign threat needed a cohesive front from all of the states and a power that would over-ride parochial concerns and interests.

A closer look at history will reveal that a degree of chaos and uncertainty plagued the new states and many of the leaders who would later call for a central, National government.

The truth is that the disputatious founders — who were revolutionaries, not choir boys — seldom agreed about anything. Never has the country produced a more brilliantly argumentative, individualistic or opinionated group of politicians. Far from being a soft-spoken epoch of genteel sages, the founding period was noisy and clamorous, rife with vitriolic polemics and partisan backbiting. Instead of bequeathing to posterity a set of universally shared opinions, engraved in marble, the founders shaped a series of fiercely fought debates that reverberate down to the present day.   SOURCE

Richard Beeman, professor of history at the University of Pennsylvania, has authored an excellent account of those summer days nearly 230 years ago when, in the words of Pennsylvania delegate Gouveneur Morris, “plain honest men” met in Philadelphia in 1787 to give us a national republican-form of government.  Beeman reveals much about the time and the people of that age, but it also provides some great profiles on most of those 55 delegates from 12 states (Rhode Island refused to participate at the Constitutional Convention) who hammered out compromises to form a document that has endured the test of time.  But endured though it has, it seems to be little understood by many today, especially by those who never tire of telling us what the founding fathers intended. In honor of the nation’s upcoming birthday where they declared their independence from the British monarchy on July 4th 1776, I have taken some excerpts from Beeman’s book, Plain Honest Men: The Making of the American Constitution, that will generally conflict from what we hear today of those less knowledgable about America’s early history but tend to represent their most vocal contingent.  (All bold emphases are mine)

2. Unlike the stoic images we see of James Madison, his brilliant mind was offset by chronic “suffering from a combination of poor physical health and hypochondria, and [was] painfully awkward in any form of public speech.”  (p. 24)

3. Contrary to what some Tea Party advocates insist today, Madison was convinced that the weak central government of the Confederation posed as serious a threat “to liberty and, equally important, American unity” as those threats they faced by taxation from “a distant, overbearing imperial government and the unbridled exercise of power by royal governors.”  (p. 27)

4. Madison’s efforts to form a national government evolved from his concern for how state governments “had overreacted to prior abuses of power by British and royal governors.  He felt that the states “frequently enacted ‘vicious legislation,’ too often prompted by the whims of public opinion rather than sober reflection”.  One such whim was that of fellow Virginian and patriot Patrick Henry who tried “to derail the passage of Thomas Jefferson’s Bill for Religious Freedom, a move that threatened to undermine one of Jefferson and Madison’s most cherished principles – the separation of church and state”.  (pp. 27-28) 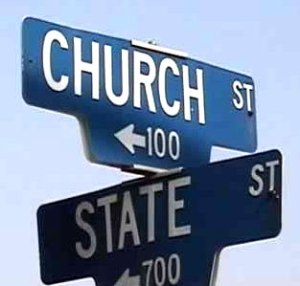 5. The two-house legislature, the senate and lower House, was a concept derived from the British parliament where there was “an ‘upper’ and ‘lower’ chapter – an elected House of Commons and a hereditary House of Lords”.  Though Madison’s Virginia Plan “rejected the English notion of a hereditary upper chamber”, the concept was appealing to many Convention delegates because “it reflected a continuing belief in the traditional English idea of rule by a virtuous few”.  (p. 89)

6. Originally the democratic practice we exercise today by electing the President through the popular vote was not considered.  Instead the position would be selected by a “national legislature” and it wasn’t clear to all of them whether this should be “a single person or a group of people”.  Again, the founding fathers at the Convention were concerned about allowing the common people to elect “the country’s most able and thoughtful citizens” feeling that only people like themselves, “wise and knowledgable people” would be better suited to select the executive.  In the end they compromised and proposed the electoral college system we now have today where people would vote for their Presidential candidate but selected electors in each state would actually make the final determination.

7. Gouverneur Morris of Pennsylvania was one of the delegates at the convention who felt strongly about a national government.  The weaker Confederation federal government, Morris felt, “ was nothing more than a ‘mere compact resting on the good faith of the parties’ whereas a supreme, national government. would possess ‘a compleat and compulsive’ power.  ‘In all communities’ he contended, ‘there must be one supreme power and one only’.  It was essential to locate sovereign power in the national and not the state governments if America was to be a nation worthy of the name”.  (p. 101)

8. Ron Chernow, the author of “Alexander Hamilton”,says that there’s a belief among “many Tea Party advocates to adhere to the judicial doctrine of originalism — i.e., that any interpretation of the Constitution must abide by the intent of those founders who crafted it.  However, we learn from a rough draft of the Constitution, written by Virginia’s Edmund Randolph, two principles were laid down “that, while they never appeared in the final report of the Committee [of Detail], seem extraordinary in their wisdom and foresight more than two centuries later”.  They were

The first gives credence “to contemporary jurists and constitutional scholars who argue that ours is a ‘living constitution’ that must be interpreted in the light of changing times and circumstance, while the second supports the notion of those today “who argue for an ‘originalist’ interpretation of the Constitution”  (p. 270)

Thus we have clear evidence here that there is and was no absolute rendering of how the founding fathers “intended” the Constitution to be interpreted.  Clearly from Randolph’s view it was meant to be open-ended to a certain degree that would accommodate those situations in the future they assumed would have no bearing to their way of life then.  One delegate couldn’t even envision that the nation he helped found would still be around today.   Nathaniel Gorham of Massachusetts doubted that the United States of America would remain one nation beyond 150 years.

Ron Chernow tells us in his NY Times Op-ed piece that “Dutch historian Pieter Geyl once famously asserted that history was an argument without an end”.   We see this playing itself out today as those within the Tea Party continue to cherry-pick the information from a select few political leaders in our early American republic who were fearful that a nation ruled through a powerful central government would devolve into a repressive regime as they experienced under George III of England.  Reality has not caved to such fears but that doesn’t prevent them and others from suggesting that such can occur, but only of course when their political opposition have primary control of most or all of the branches of government.

The Founding Fathers versus the Tea Party

How the Tea Party’s fetish for the Constitution as written may get it in trouble.

4 responses to “The Tea Party, the Constitution and the Founding Fathers: An Argument Without End”