Here’s a news item that exposes the threat we face as a nation today for our failure to implement a strong energy policy decades ago that addresses the hazards of increased carbon-based fuel use. 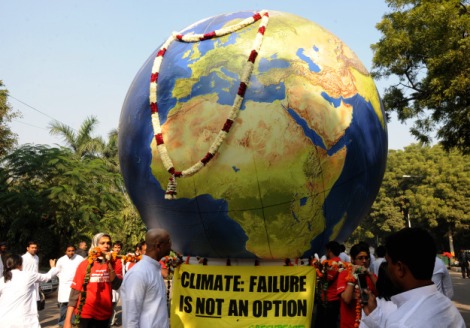 Oil demand has fallen for the first time since the 2008-09 global financial crisis, a result of the weakening economy, a mild winter and high crude prices, according to new estimates from the International Energy Agency.

The industrialised nations’ watchdog said oil demand dropped by 300,000 barrels a day year-on-year in the final quarter of 2011. While still forecasting overall growth in demand for 2012, the agency revised down its outlook for this year to growth of 1.1m barrels a day, from 1.3m b/d, and said further downgrades were possible. Global oil demand in 2011 was 89.5m b/d.

David Fyfe, head of the IEA’s oil industry and markets division, said the drop in demand late last year reflected the mild winter, which was in sharp contrast to the cold winter of 2010-11. But it was still surprising. “It is quite rare” to see an absolute contraction, he said. “We’re flagging that there are clearly downside risks to the global economy and to oil demand.”     SOURCE

It may not grab those who aren’t looking for it, or worse, who are in denial, but part of the reason oil demand decreased was the result of a warming climate this winter, a trend defined as “season creep”  by phenologists, that will continue as the planet continues to warm at an alarming rate.  Deny all you want that increased rates of CO2 from using fossil fuels is the culprit here but the evidence is mounting to not only support this view but such evidence also further debunks some of the old arguments that attribute rapid increases of global warming simply to the sun and reflectivity.

As jobs are lost, less demand will occur for coal, oil and natural gas to heat homes and businesses.  Unless those job losses are offset by new ones in the renewable energy field, the economic impact in northern most regions, like the upper continental U.S.,  will be significant.

But not only will warmer, shorter winter seasons effect jobs, it will affect overall health.

As climate change causes winters to warm and seasons to shift, a host of exotic invasives and destructive natives are marching their way into our lives at an ever increasing rate.

According to a new report from the National Wildlife Federation, these climate invaders will continue to spread disease, destroy valuable natural resources and push out the native plants and wildlife Americans cherish if global warming continues unabated.  SOURCE

Our short-sightedness to plan for this eventuality is evident with the current efforts by the fossil fuel industry and pro-pipeline labor unions to push through the TransCanada pipeline known as known as Keystone XL, which would bring approximately 800,000 barrels of oil per day from the Canadian oil sands to the U.S. Gulf Coast.  Both sides of this argument dispute the number of jobs this pipeline would create but whatever the number is, the bigger picture of what the environmental impact will be from this pipeline seems to play second fiddle to the more immediate need of job creation.

It a tough line to tow for policy makers and the GOP and their corporate backers are making as much hay about this as they can to get the Presidential permit needed to move this project forward.  Sarah Ladislaw, senior fellow with the Energy and National Security Program at the Center for Strategic and International Studies in Washington, D.C. illustrates the quandary the fight over the Keystone XL pipeline makes:

[The] denial or approval of the Keystone XL Pipeline will not bring the United States any closer to discovering real answers about how to pursue a lower-carbon pathway in this country. Many in the environmental community argue that we should be investing more in alternatives to oil, and they are right. But in the absence of coordinated U.S. policy to do this on a more expedited basis, it is nearly impossible to force that kind of a transition by stopping oil production one pipeline at a time. U.S. policymakers should not be let off the hook on this larger policy question by placing disproportionate focus on a single pipeline debate.  SOURCE

She makes a succinct point but then seems to forget that our energy policy battles are not something new, as I point out shortly.  But first, I would argue that a line needs to be drawn in the sand (no pun intended) somewhere and it might as well start here.  A strong case needs to be made to point out that the tar sands are some of the dirtiest sources of oil.  The International Boreal Conservation Campaign released a report that explains how “tar sands extraction and refinement is the most polluting and carbon intensive oil process on earth, draining wetlands, diverting rivers and stripping all trees and vegetation from the forest.”

Where this pipeline runs through Nebraska is an underground aquifer that provides drinking water for several states.  A rupture in this line could taint it and make it unusable for millions of people who depend on this source of water for their families and businesses.

The long term affects for pushing this and other fossil fuel initiatives through for short term job gains needs to be presented in a manner that the public can easily discern the risks involved in picking one course of action over the other.  Sadly, most people can’t see or won’t look beyond their own immediate wants and needs to realize that 2 to 3 decades from now their kids and grandkids will be paying a high price in terms of costs related to health care and preservation for choices their parents made today.

Ms. Ladislaw and others may feel that we need to lay the ground work for an energy policy that addresses the short term energy needs to the long term adverse affects before attempting to stop oil production “one pipeline at a time”.  But the overwhelming evidence that such slow moving efforts will be negated has been apparent for sometime.  The ill-effects of anthropogenic global warming today are the result of policy makers 30-40 years ago failing to come to terms with this issue back when it was first presented to them by the climate science of that period.

We have already passed the point of no return where our ability to limit CO2 created by man’s activities will prevent some of the adverse affects, like longer, warmer summers and shorter winters, massive ice melts and acidifying large areas of sea water.  To argue that planned policy must be put in place first no longer has the reasonable appeal it once did, before the current threats manifested themselves.  We need the courage to act more dramatically now and pay what consequences may arise; consequences that will surely hurt some but will be less painful and less enduring than those consequences that will come from further delay.

Making policy under such adversarial conditions won’t be that problematic.  We know what the problem is and what the best solutions are.  We just need to get past the corporate self-interest that hang tenaciously on and the reality that there will be slightly higher fuel prices initially.  Once we achieve this we can set a course that gives some assurances to our progeny that their future will have a measure of security instead of being victims of climate change that in large part resulted from our failure to reduce and ultimately eliminate dependence on fossil fuels.