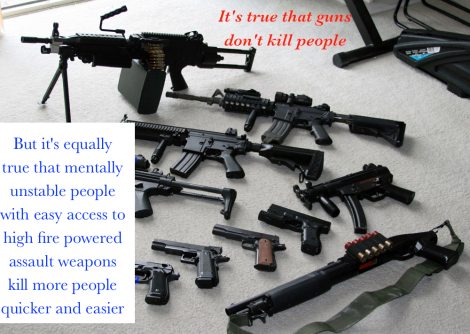 IT’S TIME FOR A CHANGE

Perhaps one of the first defenses many gun advocates like to put out there when some form of gun control is proposed is the old seven-word saw, “Guns don’t kill people.  People do.”  The intent here is to develop a straw man argument that tries to assert that removing guns from the equation will not prevent people killing people with some other means.  And if that were the preposterous argument that gun control advocates were making, gun advocates would have some credibility.  But that isn’t the case.

Here’s the case for anyone who simply can’t grasp the concept of removing deadly assault weapons from the public domain.

That’s it.  An equal seven-word retort the zealots of the 2nd amendment have no credible comeback for.  They may want to circumvent this response by asking if we should remove cars, prescription medicine, chains, bats, knives and any other object that has been used to kill people with, but that’s not the point being made here.  It’s not a matter of trying to totally eliminate killings.  That notion in and of itself is absurd and only a fanatic would use it in their argument from either side of the gun ownership/gun control divide.  It’s simply a matter of removing a tool that is more deadly and capable of multiple deaths instantly.  A tool that is solely designed to kill humans unlike other items that have a primary purpose not related to killing.

Knives can be deadly weapons and some are actually designed as a means to kill, such as bayonets and switch blades   But unlike guns, knives are regulated to restrict its use from killing people.  Federal laws have made it a criminal offense to possess and conceal any knife with a blade longer than two and a half inches and many local jurisdictions can arrest you with a knife whose blade is longer than 3 inches.

Federal regulations and the Switchblade Knife Act of 1958 “prohibits the manufacture, importation, distribution, transportation, and sale of switchblade knives in commercial transactions substantially affecting interstate commerce between any state, territory, possession of the United States, or the District of Columbia, and any place outside that state, territory, U.S. possession, or the District of Columbia.”   Forty-four of the fifty states also make possession of such knives limited, very limited or illegal.   Yet guns of most classes do not get such scrutiny thanks to the gun manufacturers lobby in this country, the NRA

Bear in mind too what most knives today are designed for.  Some are used to surgically open someone in a medical operation in order to save their lives.  Knives, referred to as cutlery, are also used to chop, slice and pare food to nourish our bodies.  Obviously this can’t be said about guns.  Nor can guns be used to hit a two-run grounder to center field, tow our cars, or control our asthma like baseball bats, chains and prescription drugs can.    Unlike guns, knives can benefit mankind.

If James Holmes, the mass murderer in Aurora, Colorado, intended to kill more than one person at the Century 16 movie complex before being stopped, he would not use any other item than the ones he chose.  The ability to kill so many people rapidly is the advantage a shooter has over someone who wields a knife, club, chain, etc.   In using these less lethal tools he would have likely been overcome by others in the theater before he could do any serious harm to more than one or two people.

Any proposal that legislators, law enforcement officials and ordinary citizens put forth to reduce the incidences of mass murder this nation has seen an increase in over the last 30 years needs to be a three-pronged endeavor.

1. Remove most assault style weapons and extended magazines from the public domain

Advocates of the second amendment have won their right to possess a firearm as a means of feeling secure in their home.  This is now codified in our law following the Supreme Court ruling in 2008, District of Columbia v. Heller.  But owning an arsenal of assault style weapons isn’t inherent in this right.  This is implied in conservative justice Anton Scalia’s remarks when he gave the majority comment in this case.  “The Second Amendment right is not a right to keep and carry any weapon in any manner and for any purpose.”

People who have mental health issues are not mass murderers but those shooters who engage in mass killings do have serious mental health issues.  Without stigmatizing the mental health community in this country we need to have an intense effort to assess those who suffer from depression, schizophrenia, paranoia and other related issues that can lead someone over the edge and kill innocent people.  Rather than cutting funding for mental health we need to make resources available that can address this serious issue.

In recent years, the worst recession in the U.S. since the Great Depression has dramatically impacted an already inadequate public mental health system. From 2009 to 2011, massive cuts to non-Medicaid state mental health spending totaled nearly $1.6 billion dollars. And, deeper cuts are projected in 2011 and 2012. States have cut vital services for tens of thousands of youth and adults living with the most serious mental illness. These services include community and hospital based psychiatric care, housing and access to medications.    SOURCE

3. Reduce the culture of violence in this country

Why is it that the “United States has far higher rates of firearm deaths firearm homicides, firearm suicides, and unintentional firearm deaths compared with other high-income countries?”  Might it have something to do with how we as a culture perceive dealing with our demons and misfortunes.  In a society that profits tremendously from violent movies and video games along with vigilante attitudes that have a low tolerance for allowing the legal system to correct injustices, are not our children more prone to grow up feeling that swift action at the end of a gun is an easy option to choose from?  Other factors that play in here are childhood bullying and religious fanatics who are ill-suited to accommodate the legal system where they feel their religious dictates are challenged.

Consider too the imagery of the video and Hollywood hero standing with legs separated and braced as he holds a powerful automatic weapon and blows off rounds at his imaginary evil enemy, all done in slow motion with empty shells flying out of his weapon and piling up at his feet.  Is this how mass killers envision their slaughter of innocent school children and mall shoppers?

There is no single factor that leads to the horror of a mass killing.  And each aspect needs serious study to find solutions.  When knives, chains, bats and bricks become the destructive force that firearms are today in such heinous crimes, then maybe the conversation will only address mental health issues and our culture of violence.  But for now it also requires taking on the gun industry and the 2nd amendment zealots at the NRA and elsewhere.  We can honor that perception of the 2nd amendment regarding personal ownership of a weapon without buying into the fear that unless we are armed to the teeth we risk being suppressed by a savage dictator.

We are not a country that has a history of instability and ruled by iron fisted autocrats like Germany and Russia following WWI or Cambodia in 1960’s who experienced the brutality of Pol Pot. Unlike the U.S. that has had a stable democracy for over 200 years – with only the 4 year period of the Civil war breaking from this pattern – these countries were never fully cognizant of or had any real experience of personal freedom as we have had since our inception in the late 18th century.   We are grounded in a long tradition of laws that govern human freedom along with having real-life experiences, making us much less susceptible to interlopers who would take it away.

We are however susceptible to the fear and suspicion that accompanies protestations from extremist who fail to see sane gun control measures as anything other than a paranoid attempt to “take our guns away”.  We need to step back from the hysteria generated by the zealots and take in the reality that makes it easy for a single person to kill innocent and defenseless children in a matter of seconds.

Each of us must ask ourselves following the tragic mass killings at Aurora, Colorado and Newtown, Connecticut, “what if it were our child, brother, sister, mom or dad that died from the last bullet in a magazine that held 30 rounds instead of 10, from an assault weapon bought at a gun show that didn’t require a background check?”  Whose rights are really being violated here?

Guns and Knives: A Tale of Two Tragedies