When American colonists ended the British monarchy in the 18th century we were given the hope that “the people” would be in control of their fates.  But over the last two centuries, wealthy special interests have been fastidiously working to undermine that notion and create instead a new regal authority.  One that doesn’t have to answer to the general population.  The Corporate throne has now become the golden calf of worship for many who have been mesmerized by the monetary prophets with the false hope that the only thing that prevents anyone from achieving great wealth is their own lack of will to do so. 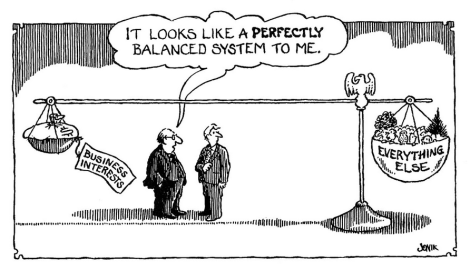 There’s a clarion call by libertarian advocates that continues to demoralize governments and elevate champions of free markets.  The “heros” in this scenario are no longer the great charismatic leaders that moved this country forward in earlier times like Washington, Adams, Jefferson, Jackson, Lincoln and both Teddy and Franklin Roosevelt,  but CEO’s of vast corporations elected not “by the people” but by a board of trustees who select mostly men and some women to head their companies to attain the greatest profit share possible.  Their vast wealth gives them great influence over public policy, often negating the wishes of the electorate.  The general welfare of most Americans is subverted for the needs of policies that effect greater profits for the corporate state.

The free market appeal lies in its ideal form of self-preservation.  It affirms if business is left unrestricted by government there exist, in theory at least, an “invisible hand” that will create greater wealth for most as it corrects deficiencies within the markets that work against this greater good.  The notion that we will always do what’s best for us in the long run, even make sure that the powerless are not exploited for fear that they could upset this ideal if disenfranchised unfairly for too long, goes unchallenged by the zealots of a centuries old concept first spelled out in Adam Smith’s early 18th century tome, Wealth of Nations.

Like all ideals however there are the serious flaws that get overlooked by those who want this concept to work despite any Achilles heals that exist.  In this ideal people are not social creatures but consumers.  Free market principles value consumer needs, not social justice.  When Adam Smith published his philosophy it was done at a time when markets were essentially local and limited in product type.  Mainly food and clothing commodities that were produced locally.  Smith’s concept was intended for this limited style of markets.  Not the vast system of multinationals we have today.  And though it incorporated a concept that was supposed to serve as an ethical guide for entrepreneurs, it recognized that human weaknesses could exploit certain self-interests and would always be at play, thus requiring a regulatory power by a democratic government to offset human greed.

Our founding fathers were aware of the abuses that corporations could exact and their counsel was often at odds with the growing advocates of laissez-faire policies.  Over 150 years ago Abraham Lincoln who served as the first President elected by the nascent Republican Party warned of the threat of corporate special interests:

“I see in the near future a crisis approaching that unnerves me and causes me to tremble for the safety of my country. . . . corporations have been enthroned and an era of corruption in high places will follow, and the money power of the country will endeavor to prolong its reign by working upon the prejudices of the people until all wealth is aggregated in a few hands and the Republic is destroyed.”
—U.S. President Abraham Lincoln, Nov. 21, 1864

Within a generation of his death his prophecy became fulfilled.  The Robber Barons of late 19th century America comprised what Mark Twain called the Gilded Age, where the use of the extravagant wealth by men like Rockefeller, Carnegie and JP Morgan became the modus operandi to slowly suck the power of the people out of our democracy and transform it to a plutocracy.  They were kept in check for a time by their own greed as the income disparity of that day revealed how poverty was devastating the lives of millions of Americans through low wages and unsafe working conditions.  A progressive movement arose to fight the Robber Barons and from that wages and working conditions improved and laws were put into effect that were aimed to prevent such abuses by wealthy special interests in the future.

But the Robber Barons of a later age would arise and mark time, waiting for another opportunity to seize power.  This occurred when a World War enveloped all of Western Europe and drew America into it.  It ruined European economies but American war profiteers grew wealthy from it and the country lapsed back into a condition where a handful of Wall Street giants would ultimately be allowed through weak government oversight to ravage the economy sending it into its worst economic downturn in our history.

Again we were able to pull ourselves out of this morass through the aid of FDR’s New Deal policies that led to government-funded jobs and kept banks in check.  The wealthy paid penance for the damage they had done by being taxed at a higher rate than they had been accustomed to for sometime.  Not at a rate that would break them but one that would allow our nation to invest in programs which would elevate many lower-income families into what would become the most prosperous middle class by the 1950’s.  Our success made us the most powerful nation in the world in many ways. This change that resulted in large measure by a redistribution of the nation’s wealth gave greater economic freedom to millions of Americans while businesses prospered better than they ever had.

But by the early 1970’s the forces of the old plutocratic guard were making their move again.  One of the first keystone’s put in place for this movement was Richard Nixon’s Supreme Court appointee, Louis Powell’s and his manifesto that was written to incite the financial and political power trust in this country.  It was a call to arms and has resulted in the class warfare that would ultimately weaken FDR’s New Deal Policies.  With the election of Ronald Reagan  government had expanded into the social lives of many Americans and became the bogeyman for many conservatives who still adhered to the laissez-faire practices that led to the Gilded Age and the Great Depression.

Within this movement a neo-liberal class developed that wanted to pursue social change that aimed at keeping the middle class strong but without the aid of government.  Walking in lockstep with fiscal conservatives and Wall Street bankers they hailed free markets as the new means by which most Americans could rise above poverty and sustain themselves.  They bought into Reagan’s failed concept of trickle down economics as did most Americans and by the time they realized it wasn’t the god-send they had been promised, the wealthiest amongst us had sapped the treasury of revenue through tax cuts for themselves cutting funding for many essential welfare programs and engineered policies that limited labor’s power along with keeping wages stagnate for decades.

We are in a new Gilded Age period and sadly it is often aided by people who have bought into the laissez-faire ideology of Ayn Rand and Milton Friedman.  Unlike former times when wealthy special interests had the upper hand, government was still in the hands of the people for the most part and Lincoln’s warning blunted the nonsense often touted by John Birchers, the libertarian minority in this country founded by the likes of the fervent anti-communist, Robert W. Welch and Fred C, Koch, the father of David and Charles Koch whose combined wealth today makes them the wealthiest entity in the world.

But with the collusion of neo-liberals, wealthy elites have now gained control of all branches of government and progressive efforts are often stymied by the fear mongering of those who have advanced a narrative that all liberals and Democrats are anti-American.  In my Red State of Texas and throughout the South people vote against their own self-interests simply because they can’t come to vote out a deceiving GOP Party who serves the corporate special interests over that of the public because Democrats have been effectively demonized by the word smiths of pro-corporate conservatives.

Democracy is losing out to a plutocratic form of government and is being cheered on by common men and women who actually think they are helping their own cause and elevating some forgotten creed established by the founders.  Governments are indeed broken but not for the reasons many claim.  They are broken because they no longer serve the general welfare of the nation.  We have been duped into believing a failed idea that government is the problem, not the solution.

This is separate from Henry David Thoreau’s affirmation “that government is best that governs the least.”   Thomas Jefferson carried it even further when he said that government is right “which is formed by the will of the nation substantially declared.”   He further expressed the hope that his would be “the age of experiments in government, and that their basis will be founded in principles of honesty, not of mere force.”

Honesty is now missing in the halls of Congress and state legislatures and has been replaced with the force of special corporate interests, dressed up to reflect some noble ideal but in reality infers majestic power to a new corporate monarchy.