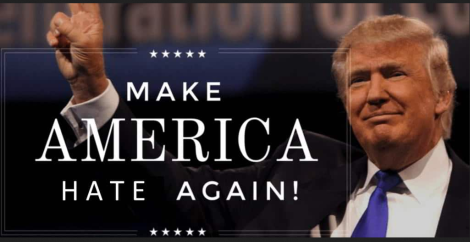 Too many people hate their lives because they feel unfulfilled.  Their share of what they feel they are due is always out of reach for them and of course for most of them it’s never their fault.  It’s the demons they create that have left them in their dour condition.  This is not to say that some groups are not disenfranchised by powerful special interests.  Abuse of power has been an intricate part of America’s heritage from the very beginning.  But never has such contempt for others aided and abetted the election of a president who encourages such vilification.

Trump’s contempt for people is not constrained along political or ideological lines but it is with many of his supporters who comprise the ever-expanding fringe of Republican politics and conservative ideology and he uses their hate to extract some sense of adulation all narcissists require.  It’s a symbiotic link that feeds both of their needs to release their contempt for those who they attribute much of their pain to; who they feel have ignored them and their needs and are now elated that their day has finally come.

For the kid from New York City it is anyone who will not accept his self-fantasy of superiority.  Though born in a well-healed family Trump was never accepted by the 5th Avenue crowd across the East River that separated Manhattan from his lower-income borough of Queens   For most of those who voted for him it is their futility with a political and economic system that’s been catering almost exclusively to the wealthy haves of society for the past 35 years at least.

Oddly it is a system created by the reduced effects of regulation which many of these haters have promoted.  Unfettered free markets are exploitable like anything else in this world and the notion that they’re not is the pied piper lure that suck many of those in who vote against their own self-interests

This shared rejection from the more privileged class is at odds with the fact that Trump himself is a billionaire, albeit mostly though disreputable means and that his supporters only seem to think that the Democratic wealthy elite are the source of their misfortune.  This sense of being an outcast is what unites them and DT has exploited this feeling of alienation along nativist lines that looks down on liberals and non-whites, marking them as traitors to the real America, the one that the Donald’s campaign kept insisting had lost it greatness

This hatred is exhibited in behaviors with DT’s supporters that cheer on his insults and threats toward his adversaries.  Behavior that would normally unnerve mainstream society and find common ground to condemn such acts.  In a New Yorker article by George Saunders last July he noted that “[a]n ungentleness gets into the air when Trump speaks, prompting the abandonment of certain social norms, … norms that, to fired-up Trump supporters, must feel antiquated in this brave new movement of ideological foment.”

That was during the campaign however when everyone was sure he wouldn’t win and by some remote chance if he did, such behavior would disappear.  Many of us weren’t fooled by this prospect.

His belittling comments recently toward the nation’s judiciary were found to be “disheartening” and “demoralizing” by his own Supreme Court nominee, Neil Gorsuch.  A mild rebuke but one that has likely never been heard between a nominee and the president who selected him.

During a White House listening session recently with law enforcement, a Texas Sheriff mentioned a state senator who wanted to introduce a bill requiring that a suspect get convicted before their assets can be seized.  The former reality TV star famous for the “you’re fired” one-liner  responded by “jokingly” threatening to ruin that state senator’s career.  “Who is the state senator? Do you want to give his name? We’ll destroy his career,” Trump said, prompting laughter among those gathered at the meeting.

The new president has repeatedly berated the press for correcting his “alternate facts” and critiquing the unorthodox measure of not divesting himself via a trust fund from his wealth and failing to make his income tax public.  His closest advisor, Steve Bannon, has publicly stated that the press should simply “keep its mouth shut” claiming the media is “the opposition party”.

These words from some obscure blogger would be relatively harmless.  But those adoring fans who hang on to every tweeted word of this demagogic leader – millions of them – take them to heart, obscuring the sane reality of civil norms.

We’ve seen this kind of method used in Hitler’ rise to power as he energized the pure Arian Volk who went after the jews and many elites that the Nazi leader wanted marginalized.  Cambodia’s Pol Pot had similar appeal to the common man and woman and in so doing was able to decimate nearly 25% of the Cambodian population, many who were educators and professional people who held the critical thinking skills to challenge the autocratic ruler.

The same occurred under Hugo Chavez’s reign in Venezuela where his appeal to the “forgotten people” enabled him to stay in power for years.  His administration was rampant with corruption and his use of thugs and terrorists to enforce his will sent many of his opponents running for their lives.

In DT’s rise to power we see a universal recipe at work not unlike that first laid out in the character of Senator Berzelius ‘Buzz’ Windrip, the protagonist of Sinclair Lewis’ 1935 book, “It Can’t Happen Here”.

Venezuelan writer Andrés Miguel Rondón, who lived under the Chavez regime for 15 years lays out the ingredients for this recipe.

“Find a wound common to many, someone to blame for it and a good story to tell. Mix it all together. Tell the wounded you know how they feel. That you found the bad guys. Label them: the minorities, the politicians, the businessmen. Cartoon them. As vermin, evil masterminds, flavourless hipsters, you name it. Then paint yourself as the saviour. Capture their imagination. Forget about policies and plans, just enrapture them with a good story. One that starts in anger and ends in vengeance. A vengeance they can participate in.  –  SOURCE 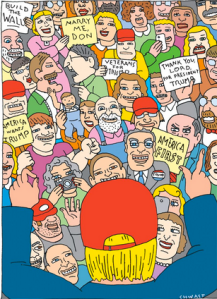 I don’t bemoan the fact that many who voted for Trump were desperate for change in Washington.  It’s to the Democrats shame that they allowed their blind loyalty to Hillary Clinton obscure the strong desire to acknowledge this populist movement that would be her undoing.  Many Independents held their nose and voted for the billionaire egomaniac simply because the tarnished image of Hillary – real or imagined – was too much to overcome. Those lost votes would likely have been cast for Bernie Sanders whose appeal to the common man and woman was more genuine and truly empathetic than someone who was raised in a 23-room mansion with nine bathrooms and a Cadillac and a Rolls-Royce parked in the driveway.

As the marmalade prince belittles his perceived adversaries it allows otherwise decent people to either chortle among themselves or vibrantly cheer him on.  Unmoved by the fact that similar actions by those they have disparaged  are unacceptable, a side of one’s humanity is willing to look the other way when someone not to our liking is under attack.

That enough of them were able to put someone so despicable into the most powerful seat in the world suggests that this once great nation is perhaps headed down that slippery slope where others have gone who were eventually overrun by the barbarian hordes of an earlier age that threw Western European culture into a dark age millennium.

OTHER ARTICLES RELEVANT TO THIS POST WORTH READING:
A Short History of the Trump Family by Sidney Blumenthal –

4 responses to “Trump Chronicles 13: The Ardent Haters and their Champion”