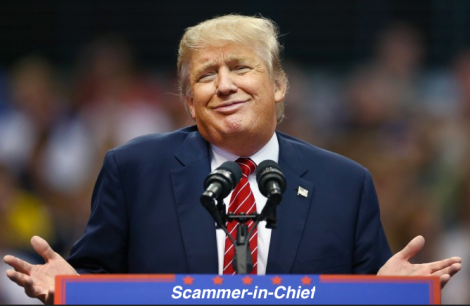 Is it just me or are others seeing a recent increase in their junk e-mail from sites likely to originate in some African nation, promising to share their vast wealth with us.  You know, the ones that tell you about money trapped in central banks during civil wars or coups, often in countries currently in the news. Or they may tell you about massive inheritances that are difficult to access because of government restrictions or taxes in the scammer’s country.

These kind of scams have been around almost as long as the internet itself.  The fact that they still prevail indicates there are enough saps out there willing to take the bait.  The most recent one I received was from a Mr. David Oju, claiming to be a Computer Scientist working with Central Bank of Nigeria.  He encouraged me to “Hurry now and claim your fund from the Central Bank of Nigeria or your fund will be confiscated by the wicked officials of the CBN.”

Somehow, having never been to Nigeria nor knowing anyone who has, it seems I have a “payment file marked X and [a] released disk painted RED.”  This samaritan went out of his way “to study it, trying to find out why the funds were not released to me.”  It appears I have accumulated some $2,700,000.00 this year alone and all he needs to transfer it to my account is to give him information that allows him access to my banking account.

At this point the normal individual would see red flags going up, even if they were stupid enough to open the email in the first place.  But don’t think this con doesn’t work on some.  In fact, just last November millions of Americans bought into the notion that a narcissistic, serial philanderer who has been involved in at least 3,500 legal actions in federal and state courts during the past three decades, was going to improve the quality of their lives and make this country great again.  All based on nothing more than his words because the man had no history of public service.  His entire life had been centered around enriching himself, often at the expense of others.

So if he can successfully bamboozle a plurality of American voters in enough states, there’s nothing to make Mr. David Oju think he can do no less.

It saddens me to think we are now seen as a nation of idiots for putting this man in charge of nuclear codes, giving scammers new hope that the “sucker” population in America has broadened?

John Steinbeck once noted that “Socialism never took root in America because the poor see themselves not as an exploited proletariat but as temporarily embarrassed millionaires.”  This foolish aspiration is what motivated many Trump supporters to back him and it is what draws scammers from around the world to tap into that foolish notion

However, if you think me merely another element of fake news trying to smear the reputation of the Donald, then perhaps I can interests you in some ocean front property in Yuma, Arizona at unbelievably discounted prices.

6 responses to “Scammers and Their New Role Model”